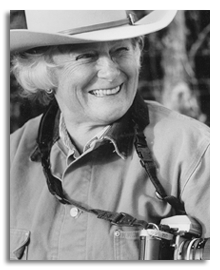 Barbara Van Cleve’s heritage is rich with family history and first-hand experience. Her family’s ranch, the Lazy K Bar, was founded in 1880 on the east slopes of the Crazy Mountains near Melville, Montana. She grew up on the ranch, riding, and working from an early age, learning from her parents and grandparents how to work and how to live.

As a photographer, she has held a camera since she was 11 years old when her parents gave her a “Brownie” camera and a home developing kit. Her youthful interest in photography soon grew into a lifelong commitment. She moved to Santa Fe in late 1980 to concentrate on photography full time and had her first major exhibition in the fall of 1985. Since that time, she has had over 51 one-person shows and has been in nearly 75 group shows. Her work is in public and private collections in the United States as well as internationally. Her photography has been published in Roughstock Sonnets, (with poetry by Paul Zarzyski), Way out West and Cowboys: A Horseback Heritage. KOAT-TV, an ABC affiliate in Albuquerque, New Mexico, produced and aired a thirty-minute video documentary, “Barbara Van Cleve: Capturing Grace,” in 1993. In the Fall of 1995, her book, Hard Twist: Western Ranch Women, was published by the Museum of New Mexico Press, and she was inducted into the Cowgirl Museum and Hall of Fame in Fort Worth, Texas. She now resides in Big Timber, Montana, where she has her studio and is close to the family ranch.