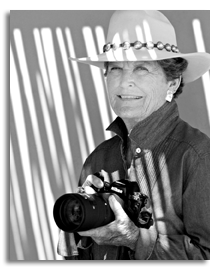 An accomplished photographer, Louise Serpa’s rodeo images have captured more than 40 years of rodeo and exude energy, excitement, and emotion. Perhaps perennial rodeo emcee/host Clem McSpadden said it best, “Louise is the Ansel Adams of our sport!” Serpa was born in 1925 and grew-up in the high society world of New York City. But a trip to Nevada when she was a child made a lasting impression. In fact, the attraction was like a strong opiate. While studying at Vassar, where she graduated with a degree in music, Serpa often interrupted her  studies to watch rodeos at Madison Square Garden. After graduation, Serpa followed the sun to Nevada, where she married a local cowboy, Gordon “Tex” Serpa, in 1953 and had two girls. When their marriage ended, she and the girls moved to Tucson, Arizona in 1960. It was in Tucson that she turned her hobby into a career by taking pictures of cowboys competing in local rodeos.

Although she never trained professionally, Serpa’s shutter skills and a natural instict for anticipating the action quickly gained her entry into the professional arena. Serpa was the first woman allowed to photo-graph in the ProRodeo arena, the first woman allowed on the course of the Grand National Steeplechase in England, and the first woman to shoot the the Doublin Horse Show in the ring. She was inducted into the Cowgirl Hall of Fame in 1999 and was awarded the Tad Lucas Medal in 2002 from the Rodeo Historical Society at the Cowboy Hall of Fame in Oklahoma City.